Tickets SOLD OUT for the 10th Annual Night At The Races Charity Event on May 7th! 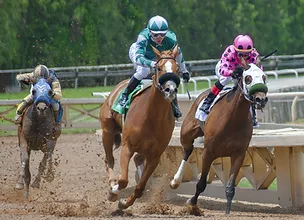 Real Estate Showcase TV-Lifestyles serves as an educational tool that informs buyer and sellers of the importance of utilizing professionals when buying, selling, building or remodeling their home. Our show features businesses and professionals with an established reputation who put their customers first. With the show’s growth, we have become a lifestyle show featuring opportunities to shop, play and dine. We recognize that buying a home is not just about the property, but the community as a whole.

Originally from Lorain, Ohio, Brenda started her career as a disc jockey in 1982 at WZAK 93.1 FM in Cleveland. Brenda has worked at numerous other Cleveland radio stations including WDMT Power 108 FM and Jammin’ 92.3 FM. From 1990 to 1995, Brenda produced and hosted her own television show called Video Jams on Akron Channel 23, an ABC affiliate. This show featured the latest music videos along with on-site taping at various locations in northeast Ohio.

While working in the broadcasting industry, Brenda had a secret love for real estate. She decided to combine both loves, television along with real estate. Brenda started Real Estate Showcase TV Lifestyles in 2001 and the show is currently celebrating its 18th season in Cleveland, Ohio and reaches 72,000 viewers per week.

Real Estate Showcase TV-Lifestyles airs every Sunday on FOX 8 in Cleveland at 11:30 a.m.